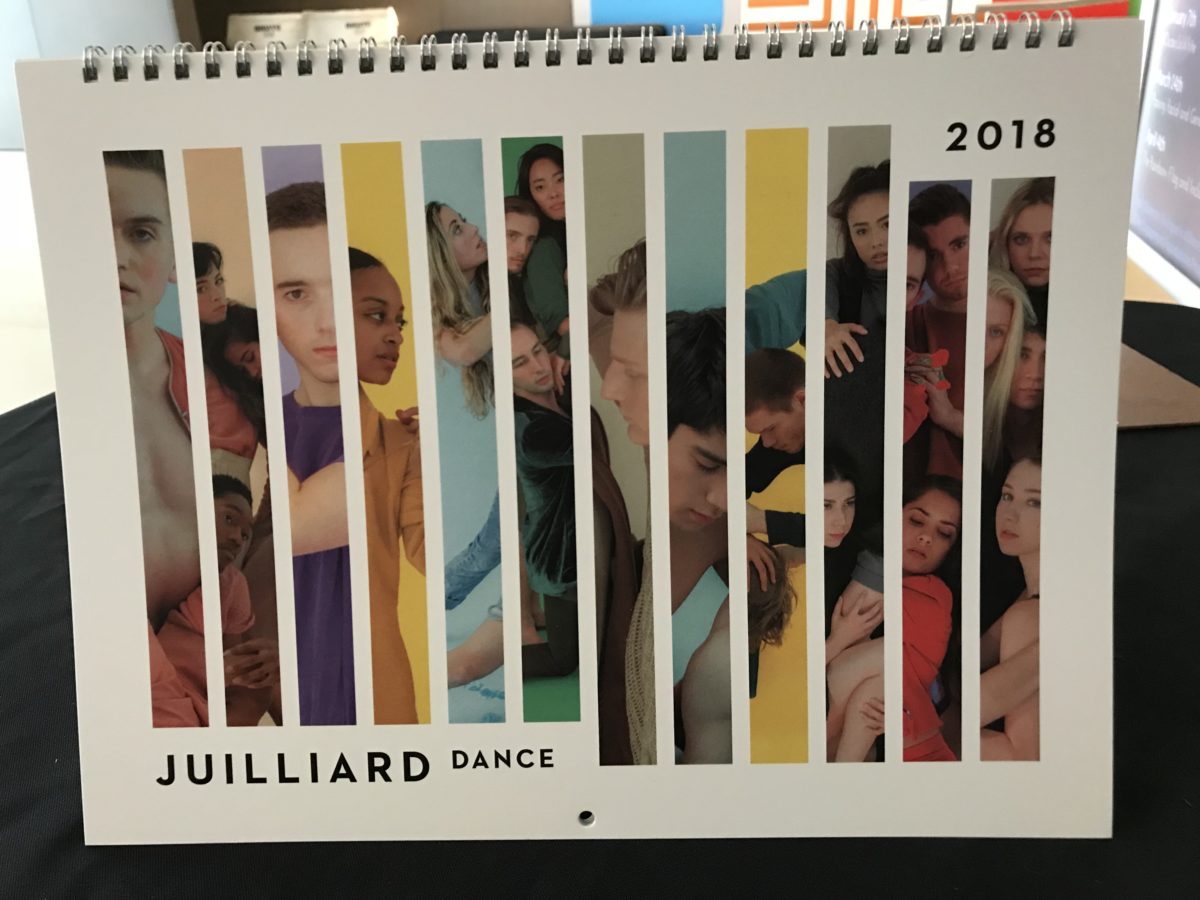 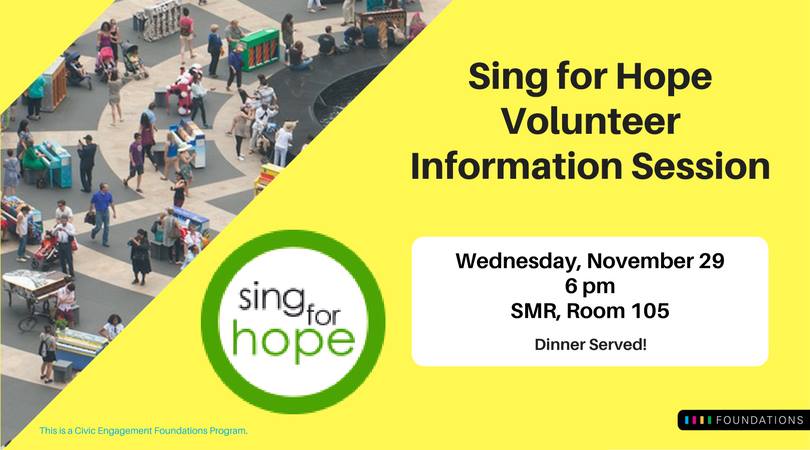 Year-round, Sing for Hope mobilizes artists in volunteer service in
healthcare sites throughout New York City. Opportunities include performing music at children’s hospital, creating an art project at a senior home, leading a sing-along at a cerebral palsy facility, and more! You have the power to use your talents and make the world a better place!

Juilliard students are invited to join us on November 29 to hear about this wonderful organization created by two Juilliard alumna, Monica Yunis and Camille Zamora, and how you can volunteer! 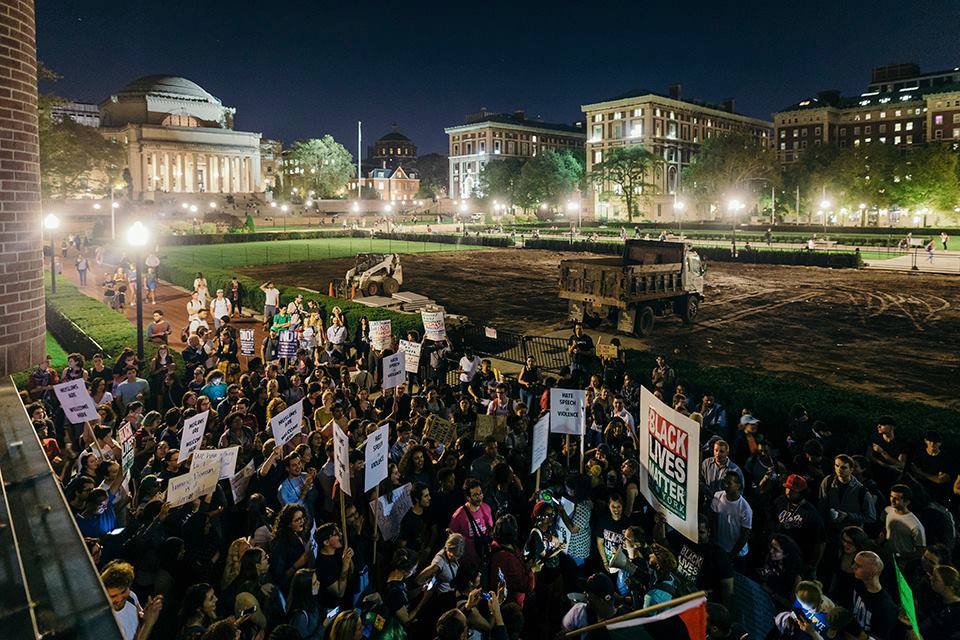 Join the Liberation Coalition, Columbia & Barnard students, and Harlem community members in solidarity as we rally and march to Columbia University’s Lerner Hall where White Supremacist Mike Cernovich will be speaking at a CUCR event. 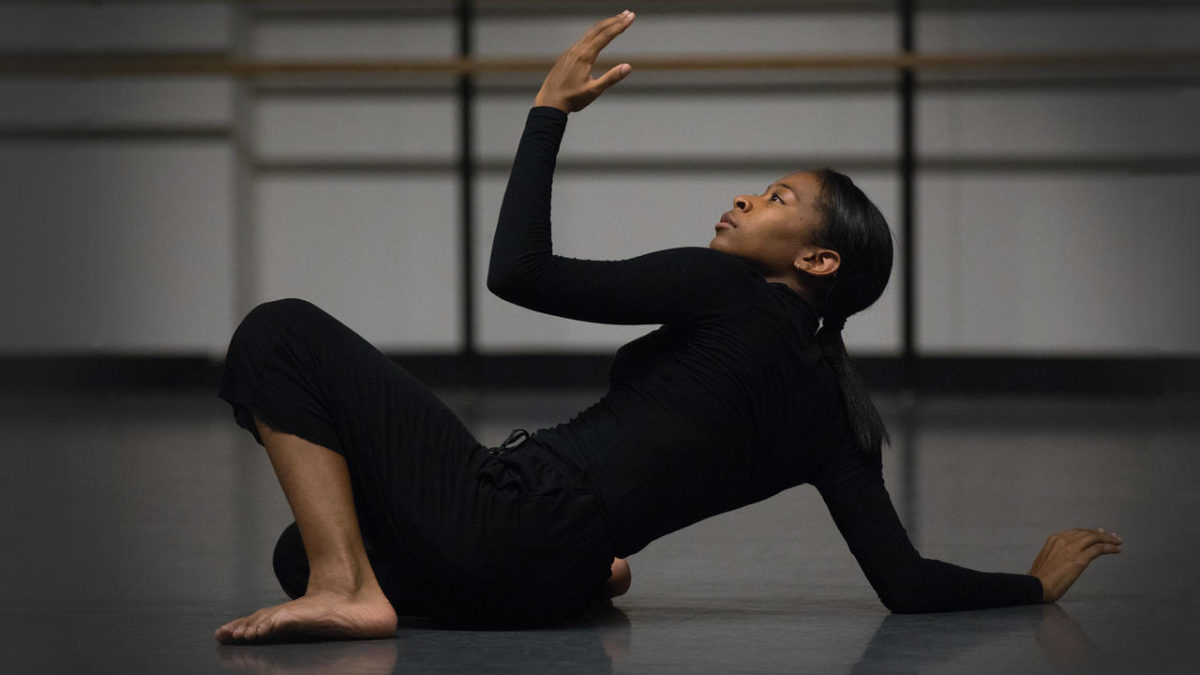 Each fall, Juilliard dancers and composers have a unique opportunity to work together. During their third year, dance students who display promise in choreography are chosen to each create a work with a Juilliard composer that will be performed by second-year dancers; the composers are a mix of undergraduate and master’s students. ChoreoComp, the popular name of the Choreographers and Composers class, culminates in two days of performances. 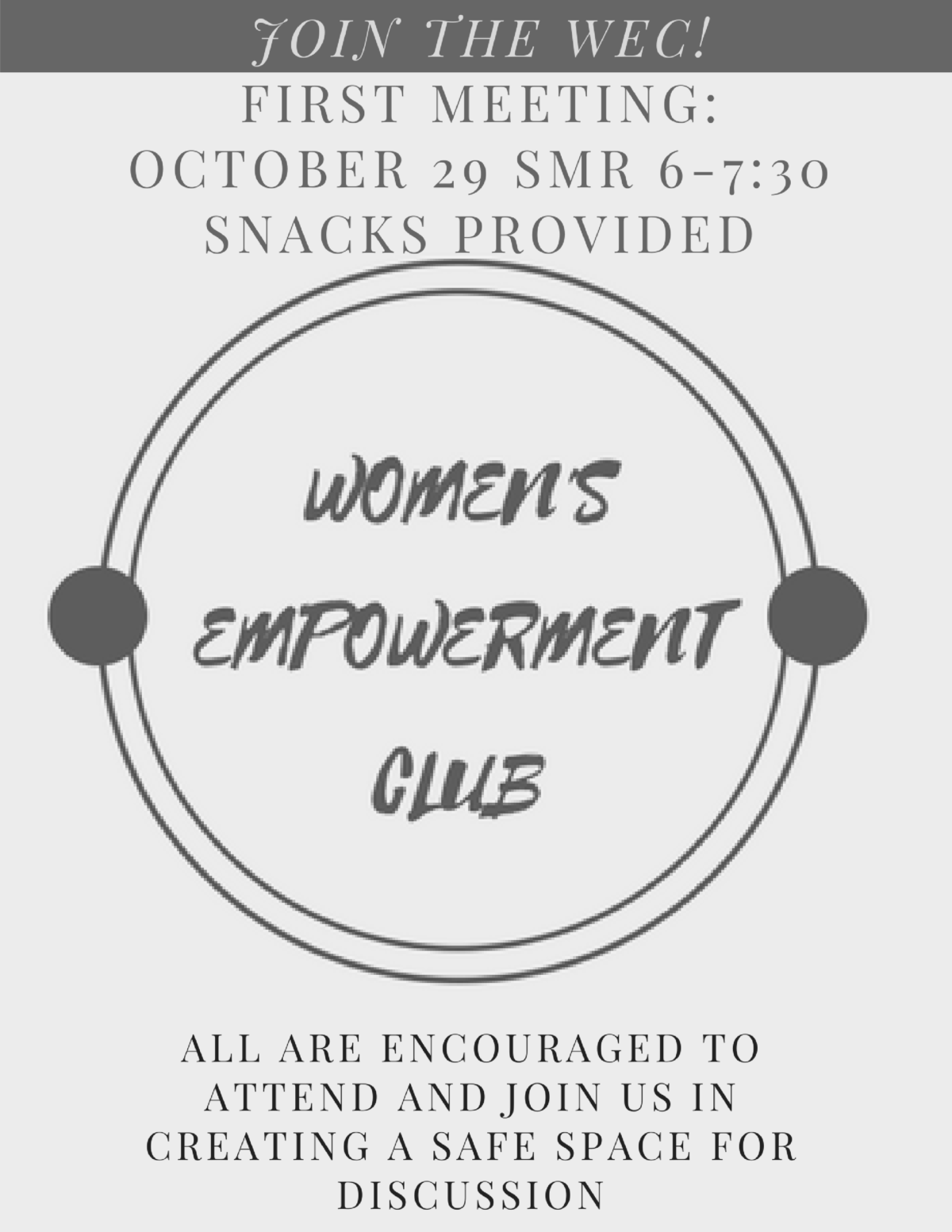 Feeling motivated to discuss issues pertaining to the treatment of women in our society? We have created a safe space to do exactly that! Come out this Sunday, October 29, from 6 to 7:30 pm in the SMR (room 105) for stimulating conversation, meaningful discussion, and of course pizza/snacks. ALL sexes are welcome to participate in Women’s Empowerment Club events. Come prepared to talk or listen; open up about past experiences if you’d like; scream, cry, laugh, everything! We hope to see you there. 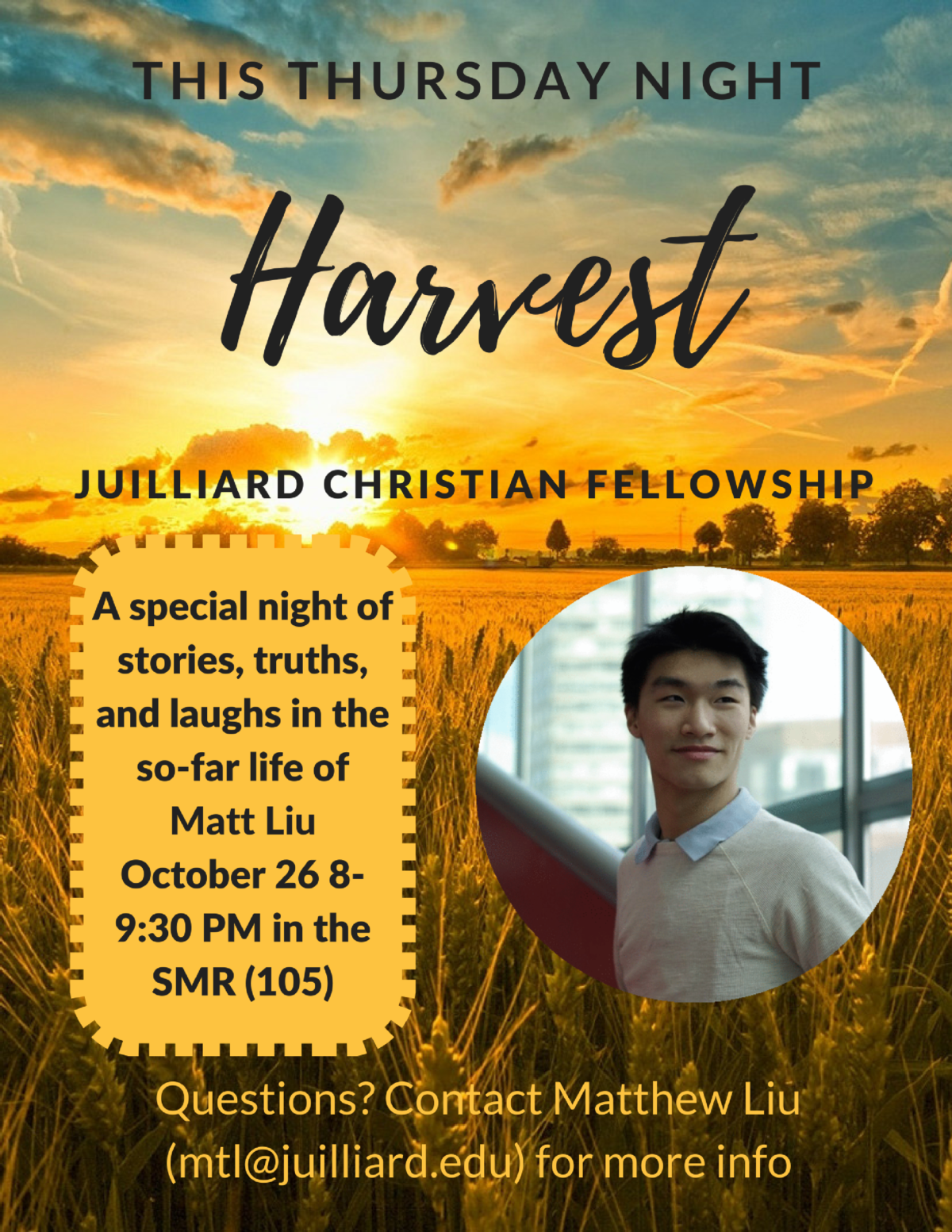 Join Matt Liu as he shares about what it’s like and what he’s come to learn about being an unconventional Christian in this day and age. Thursday, October 22 8-9:30 PM in the SMR!

Juilliard Christian Fellowship is a campus ministry group that seeks to create spaces to explore following Jesus and a spiritual family on campus. 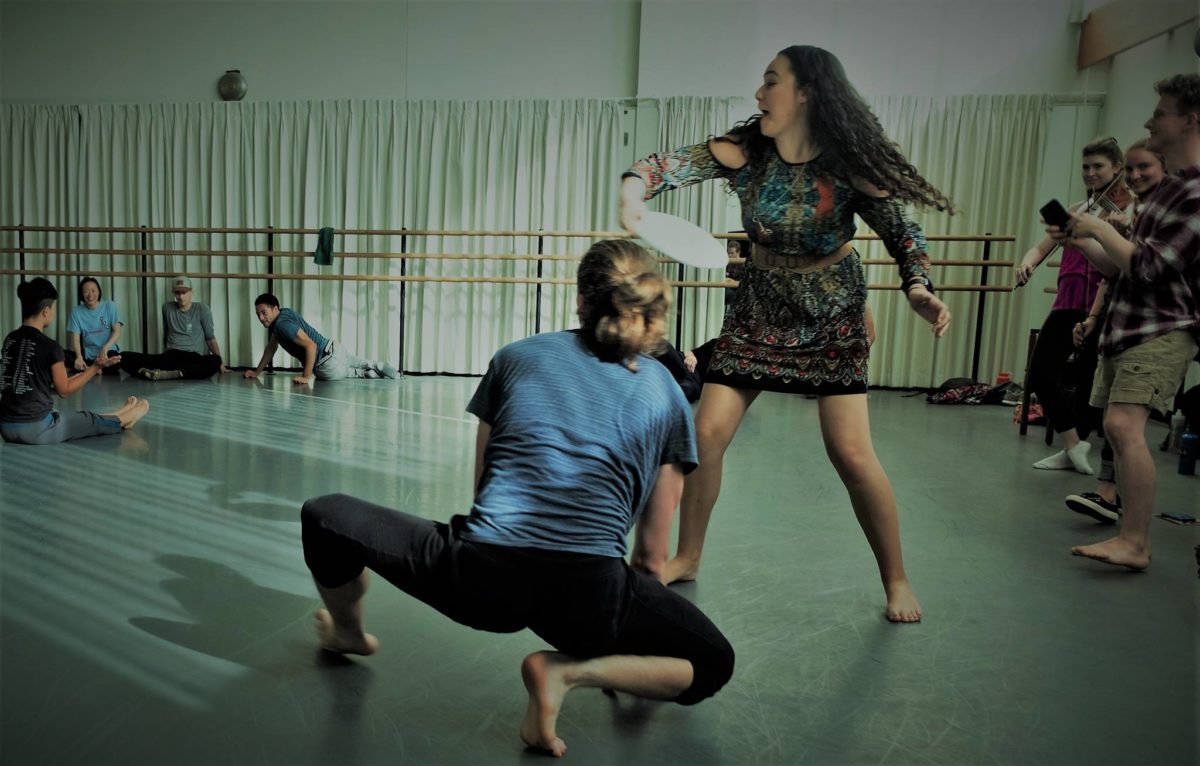 Looking for all Musicians, Actors, Writers/Poets, Vocalists or spoken word, visual artists(try it?!), anyone with an artform to collaborate in a free improv session! All are welcome – a piano is available on the premises.

Improv You Are Enough! is a series of free improv sessions specifically geared to getting artists of different disciplines together in the same space to create an instant composition.

Sunday, October 1st, 5pm
Student Multi-Purpose Room (SMR)
Right past the security desk to the right of the lobby

This retreat opens the school year activities of the Juilliard Student Council. Come to get involved, learn what projects we are working on this year, and find out about leadership opportunities. There’s already work happening around dining improvements, environmental sustainability, LGBTQ issues, racial justice organizing, and improvements to student lounge spaces in the main building. If you come, you can help us set our agenda for the year and share what projects YOU think are worth working on! Mostly, we’d love to meet you and build community together. 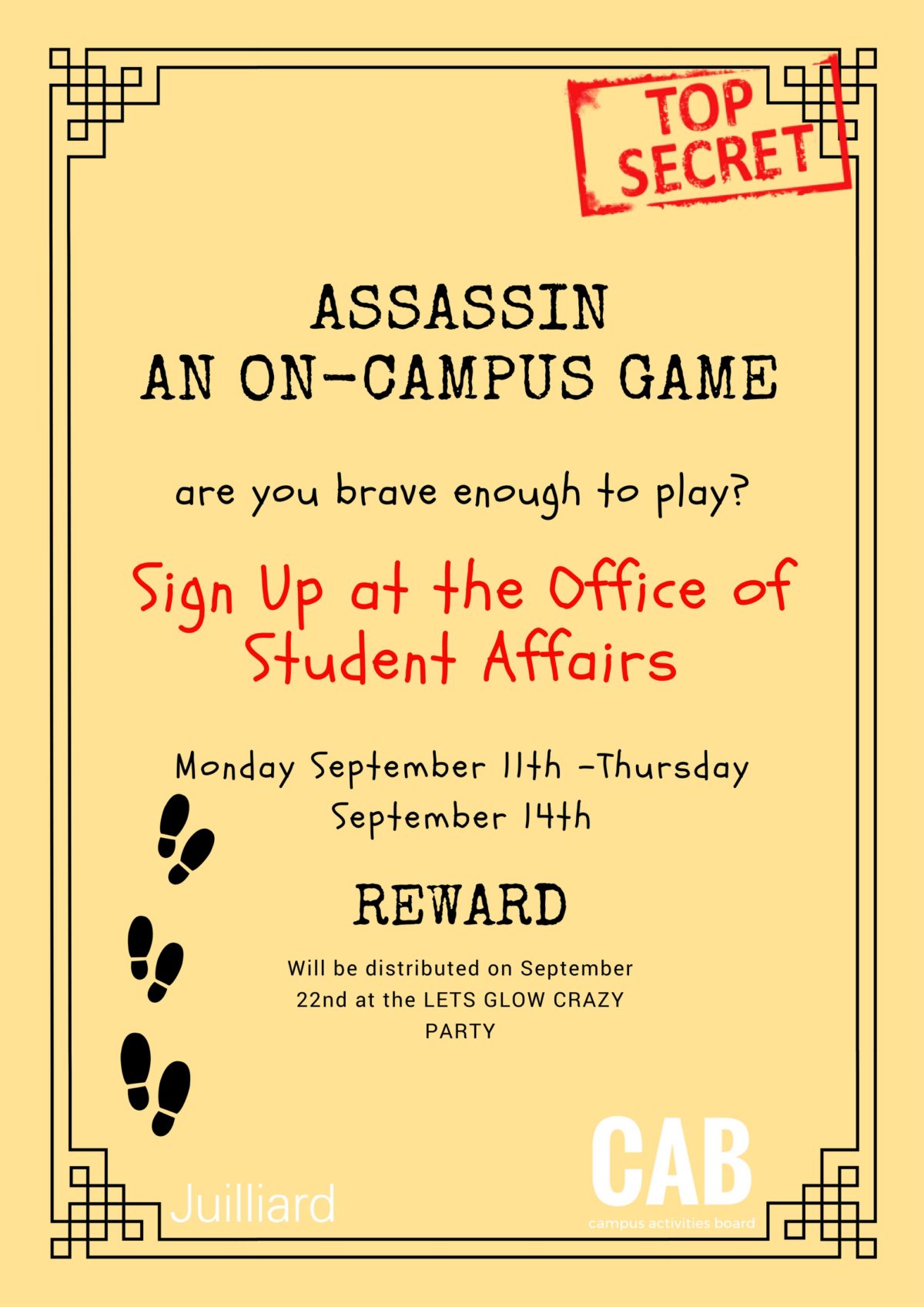 Campus Activities Board is hosting a Campus Wide Game of ASSASSIN!

The goal of the game is to build a larger sense of community throughout the campus. As we already know, school is in session and it is easy to retreat to the practice rooms! Our aim is to continue the hype of the new year and interaction with students in all divisions.

A Sign Up sheet will be located at the Office of Student Affairs from Monday September 11th-Thursday September 14th between the hours of 9am-5pm.

On Saturday September 16th, your targets will be distributed via your Juilliard Student Mailbox.

You have one week to capture your victim!

The game will reach its end at the Annual Juilliard Welcome Back Party: LETS GLOW CRAZY on September 22nd.

1. Each participant will receive an envelope with their victim’s name and information by Saturday the 16th

2. To commit the crime, the assassin will have to touch their victim’s shoulders with both hands

3. No other participant can witness the crime

4. A list with all the participant’s names will be provided to identify possible witnesses

5. Once the crime is committed, the assassin will now go after the dead’s personal victim, relieving them from their mission

6. Those who have been eliminated can now witness a crime

7. If someone is caught committing a crime, they will be automatically out of the game. The crime will be reported through the fb assassin page and the victim will be assigned a new pursuer

8. By the end of the game there will be two assassins looking for each other. The one who catches the other first, wins

9. YOU HAVE UNTIL SEPTEMBER 22nd

10. The prize will be awarded during the LET’S GLOW CRAZY party 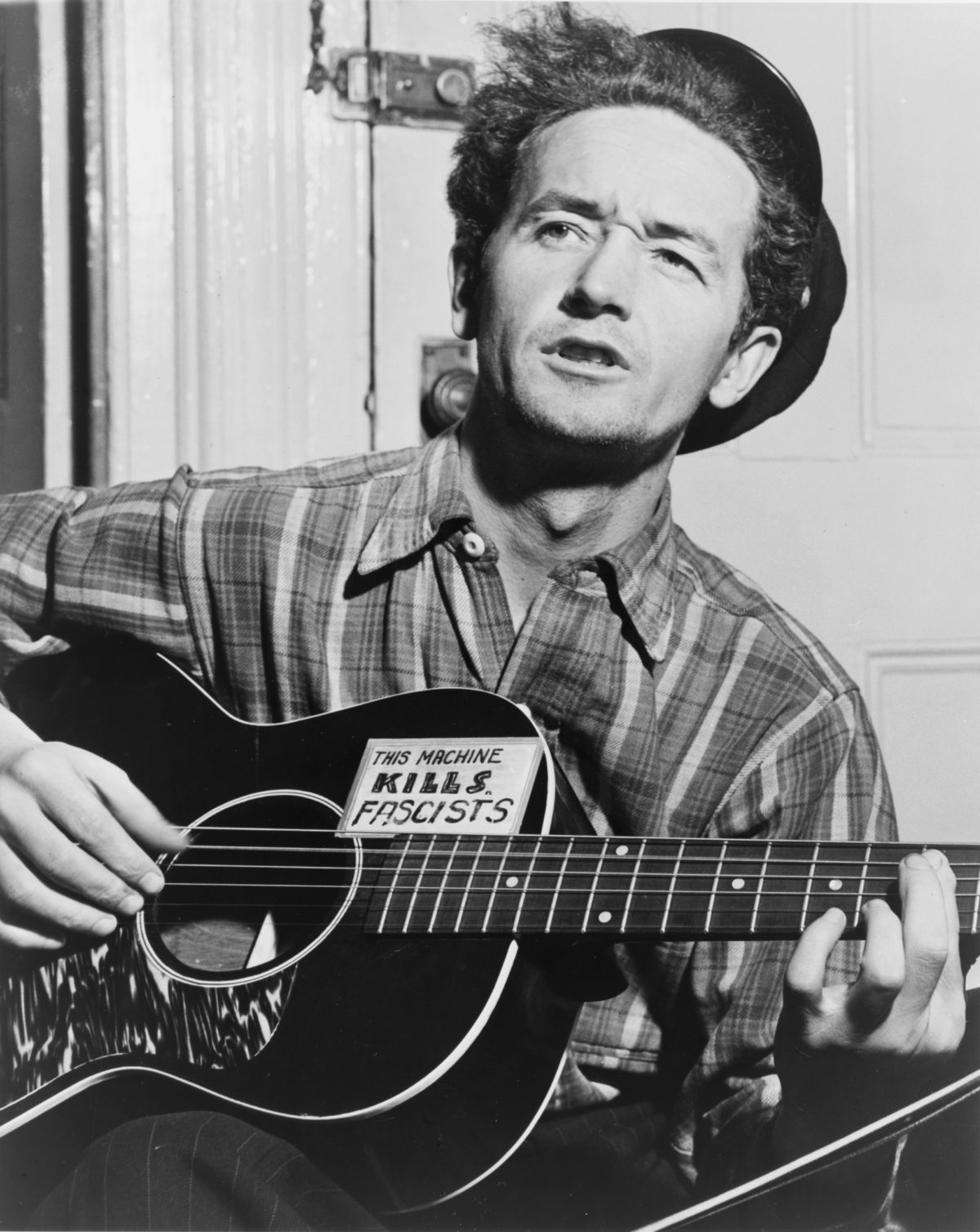 Bring your questions and concerns to a discussion on Anti-Fascism and ways to get involved, led by the formidable Aaron Jaffe, THIS Wednesday @ noon in Room 526. THERE WILL BE SOME SORT OF FOOD