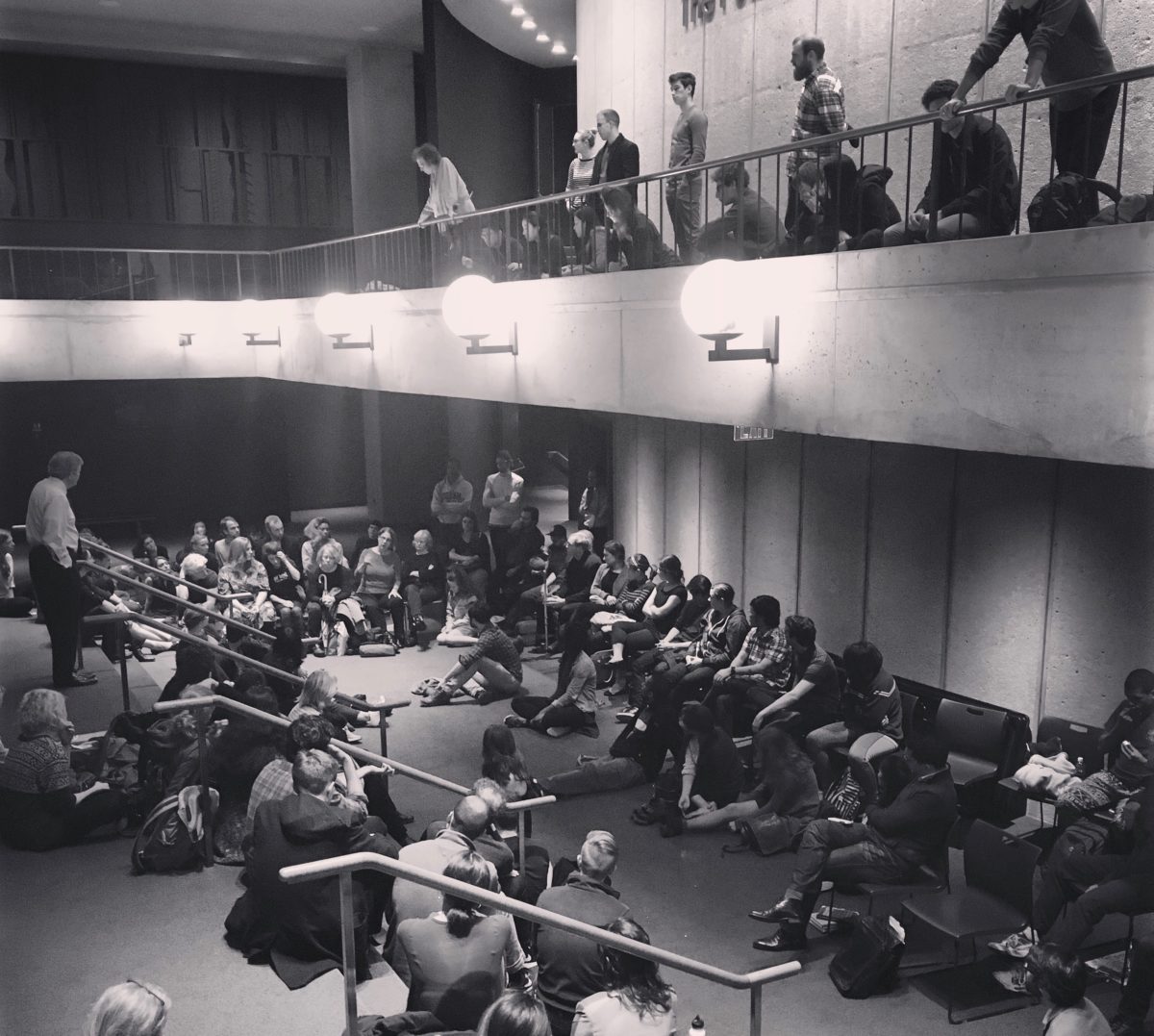 As the mixed emotions of post-Election Day reached an unmatched level, Juilliard’s Office of Student Affairs invited the community to a forum facilitated by President Joseph Polisi on November 9 in the lobby of the Peter Jay Sharp Theatre on campus. As far as most current students and faculty could remember, meetings like this were rare. Similar gatherings coincided with faculty and student deaths, the attacks of September 11th, 2001, and the Vietnam War. Students and faculty filled up the lobby of the Peter Jay Sharp Theater, sitting on the floor, stairs, and all the way up to the mezzanine. Dr. Polisi stood in the center of the room speaking and responding to numerous questions and concerns.

Polisi opened the floor to passionate exclamations of fear, anger, pain, confusion, and desire for action from both students and faculty.  “People were upset, scared…overwhelmed, and I guess that’s to be expected when something this difficult for people to handle is happening,” said Joshua Elmore (BM ’20). At moments, it was difficult to find a single dry eye in the room as students struggled to predict what the future of this country or even each individual person’s safety entails. “Right now, I don’t even feel safe enough to leave this institution because I know that my body as a black, queer woman is in danger every day,” expressed Sekai Abeni (BFA ’20).

Polisi encouraged proactivity, emphasizing the step forward it would amount to “if every one of you, or half of you, for that matter, decided to become more politically active.” He also asked those present to try moving past the election results and consequently find ways to affect change during the reality of a Trump presidency. However, this solution appeared to be easier said than done for some. “I see somebody who’s just been elected to the presidency who has publicly been endorsed by the Klu Klux Klan, who has publicly spoken out against queer people, who has publicly been a racist figure and has been elected to the presidency,” said Abeni, explaining the difficulty of moving past this result.

One purpose of this gathering seemed to be to come together as a unified community and to console one another. As such, the meeting could not provide any reassurance of the post-election effects, which left some still feeling uneasy. “I really thought it was going to be a place that we could talk about what the next steps were, specifically in ensuring [Juilliard students’] safety and well-being,” Abeni told The Citizen-Penguin after the meeting, noting “how beautifully diverse this school is.”

Still, while many students despaired over Trump’s win, their sentiments were not unanimous. “Damning” conservative voters and blocking them on social media drew ire with student Brendan Thomas, especially given the Democrats’ message of tolerance. In a Facebook post quoted here with permission, Thomas said, “If you are pissed because they don’t have the same views as you [then] you are in return guilty of the same character flaws you are projecting onto your rival party voters. Food for thought.”

Many students believed that the meeting accomplished a strong sense of unity within the Juilliard community. The gathering felt “sad, angry, tense, yet cathartic,” Mitchell Kuhn (BM’17) said. “It was a beautiful moment in that it unified the voices of Juilliard. It provided a safe space to air out grievances, to feel upset, to show support.” To have such an opportunity to speak up, students were reminded of how they can unify as a community and as artists to stand up for what they believe in. The discussion turned to peaceful demonstrations, using art as a powerful tool.  “In six years, I’ve never felt more like I’m a part of a Juilliard community,” said Zach Green (MM ’17).

At the gathering, Dr. Polisi offered a call to arms for students to organize, saying Juilliard students “may be a new generation of leaders that we haven’t seen since the seventies.” He continued:

“Juilliard is here to support you and protect you and educate you. We care about you. But ultimately, the most powerful way that you can make a difference is to empower yourself. And once you have that discipline and power and match it with your abilities as artists, that can be a very powerful process. But it’s not going to be a quick process, either.”