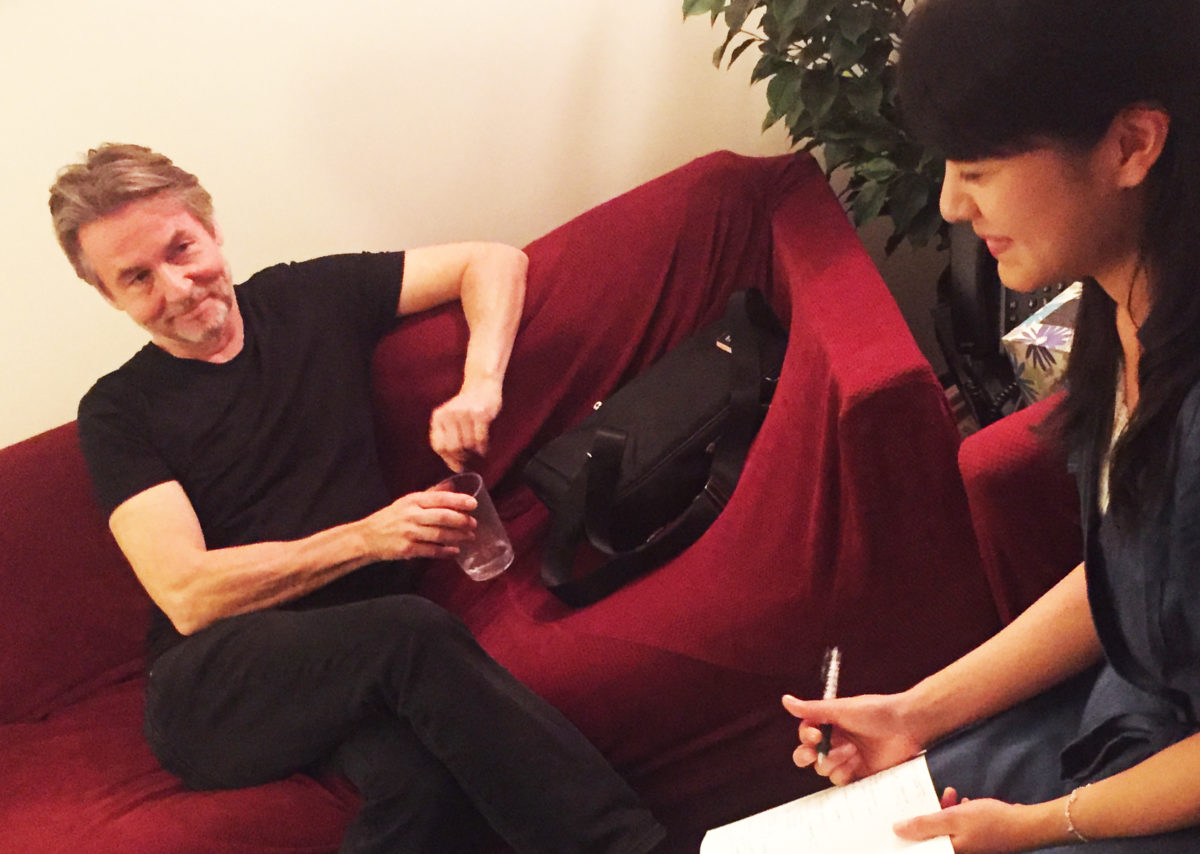 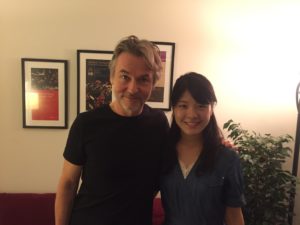 In August 2017, a joint orchestra of The Juilliard School and The Sibelius Academy (SibA) performed in Helsinki, Stockholm and NYC under the baton of Finnish conductor Esa-Pekka Salonen. During the wonderful tour where students found many different ways to explore music and culture from each other, Sumire Hirotsuru (MM’18, violin) interviewed Maestro Salonen about his thoughts on young musicians, his career, and the future of music industry.

The interview was conducted at The Juilliard School on September 5th, 2017, after both schools got united after the SibA students landed in NYC for the last concert of the tour in Alice Tully Hall.

Sumire Hirotsuru (SH): First of all, how was your experience working with two schools, Juilliard and SibA, from different countries and cultures?

Esa-Pekka Salonen (EPS): It’s been great. We often think it’s a cliche to say that music has no boundaries and that music is a language that everyone can speak, but it is true. I really enjoy “notations” that people from different background and schools can understand. So starting position was already positive. What I experienced from the conductor’s box is that communications between the musicians were becoming more natural in the course of concerts and rehearsals. Even after a few days of rest, they now look like an orchestra that has always played together. It is so nice to see everyone getting together after a few days not having seeing each other, and greeting each other all being good friends. Overall, it’s been an incredibly encouraging and rewarding experience.

SH: Is it very different to put together two orchestras, compared to work with just one orchestra?

EPS: I’m sure it’s different, but in this tour’s case, there is a kind of a spirit that both schools share; I think it’s an idea of openness and curiosity. There are some schools that have such a long, deep, and heavy tradition – what is important to them is that “we play things like this, this is the way it goes, and this is the truth.” I don’t think the Truth, with a capital t, is the most important thing in music because art is not about finding the Truth, but art is about creating experiences. Truth, for my point of view, is relatively uninteresting in terms of music making. I think the most important thing for me is the expression itself and a miraculous process from the printed page to living sound and experience. In this way, Juilliard and the Sibelius Academy share the same spirit, that is: we are about exploration, we are about the journey, but we don’t represent one tradition or one way of things.

SH: Do you think these schools are more open to collaborating with each other?

EPS: Yes, and open to adjusting. And open to new impulse as well. So the collaboration has been easier than anyone has expected. 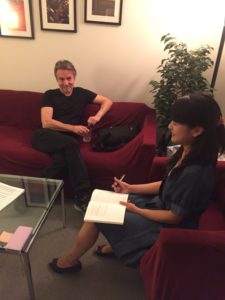 SH: I was at a lecture by Deborah Borda (the former CEO of the LA Phil, now at NY Phil) when she told the audience that you discovered Gustavo Dudamel in a competition, and she decided to get him as a director of LA Phil. What do you think is the most important thing for young students who are trying to become professional musicians?

EPS: It’s personality. Of course, what goes without saying is their skills, but I would say that new generation of musicians, is by far the best ever in the history of classical music in terms of the skill set, education they receive, and so on. When the overall skill is at a very high level, what becomes important is personality – which is, willingness to take risks, to communicate, and to project beyond the edge of the stage. In case of Gustavo Dudamel, I was on the jury of the Gustav Mahler Conducting Competition. I saw him conducting and I thought “Okay, this is something unusual and extraordinary,” because of his skill but also the way of communication. What’s important here is conveying something; it’s not only about the skill, but really is about interaction between people.

SH: What makes communication so crucial in conducting?

EPS: What conductors do is that we look at the symbols on a page, and translate those symbols into physical sounds. Physical sound itself is a tool that can be used in creating experiences that are emotional, intellectual, physical, you name it. But that process is incredibly complex and fascinating; it’s not only about the production of something that exists, but it’s really about giving life to something that more or less solely symbols at that moment. You translate symbols into something that is living. The more powerful you do that, the more convincingly you can convert that collection of abstract symbols into fresh blood – and it will lead to a good career, if you are talking about becoming professional.

SH: What do you like the most about working as a conductor?

EPS: Of course the music itself. I feel very privileged to be able to work on these masterpieces every day, and sometimes when I am studying the score, I am struck by how lucky I am to work with this music and work with some of the greatest orchestras in the world. It’s a great source of joy. I also feel privileged that I can experience musicians’ energy and talent from close range, and I can collaborate and communicate with talented people – I can really feel it because I’m in the conductor’s box in front of them, and it is a wonderful experience. I think about that every day.

SH: Do you have advice for younger colleagues or students on leading such a big group of people?

EPS: Just be yourself. Don’t think that you have to be someone different when you are on the box. Different from whom you are. You should be the same person when you are on and off the podium. Conducting is not anything like a magic cape that you wear. It’s nothing like Harry Potter or that kind of thing – you should be the same person. And don’t try to play in a robe.

SH: How do you view the future of conducting world?

EPS: Conducting is a strange profession in a sense that there is a lot of historic background. Of course this is an authoritarian aspect that has quite long even after the authoritarian society has disappeared, and that is one of the reasons why we haven’t seen many female conductors until now. That kind of an authoritarian thinking is typically male, although it’s a shame to say. Now I’m happy to witness the fact that as many talented female conductors are growing up as male conductors; wherever I go to conducting masterclasses, at least half of the most promising students are female. In 5–10 years, we might see a lot of—or I would say, normal healthy balance of—male and female conductors.

SH: I also remember when Marin Alsop (Music Director of the Baltimore Symphony Orchestra) talked at Harvard, she mentioned that she was upset of the fact that she receives a lot of question regarding being a female conductor, because the question itself shows there are only few female conductors.

EPS: Yes, the question implies something that is essentially unnecessary. The question should be “how is it to be a conductor” without the definition. But I think we have turned the corner, and it will be a number of years.

SH: At the panel discussion in Helsinki, you said that many people say classical music is dying but there is no worries about that. Do you think music industry itself is changing, or classical music will keep going as it is now?

EPS: I don’t think we can assume that anything goes on forever exactly as we know. That will be actually unhealthy. We will be seeing institutional change in the next 10-20 years; funding models, infrastructures, classical institutions will change and morph into something else, which are fine because changes happen anywhere – why not in our industry? Music itself is going to do fine.

I think that a mistake that has been made in public discourse about so called “future of classical music” is that people look at the balance sheet of some institutions that are not looking well financially, and they say, “okay, the future of music is doomed.” Once you are confused with the institutional health with the health of the art form, that’s a big logical mistake to make. Yes, some jargon-logged institutions are struggling at the moment, that is too bad. But music itself is not going anywhere. It is just infrastructures and forms that will evolve, like they always have evolved. I’m not thinking that we have to cut everything down and build everything from scratch again, but it would be also very wrong to expect that no change will be happening—because it was only 1995 when I got my first internet connection, and at that point nobody could imagine where we are now in 22 years. Therefore, we will not be able to say at this point where the music industry will be in 20 years from now, but what I can say for absolute certainty is that music is going to be fine.