By HANNAH CATON ’19: … Over the course of last year, HomeBase has transformed into a fully functioning black theatre company of fellowship and collaboration. It consists of ten NYC and Juilliard playwrights, thirty NYU and Juilliard actors and ten black directors. HomeBase is now an organization which has opened up a running thread of diverse storytelling; as well as communion, conversations, and opportunities for the next generation of black artists.… 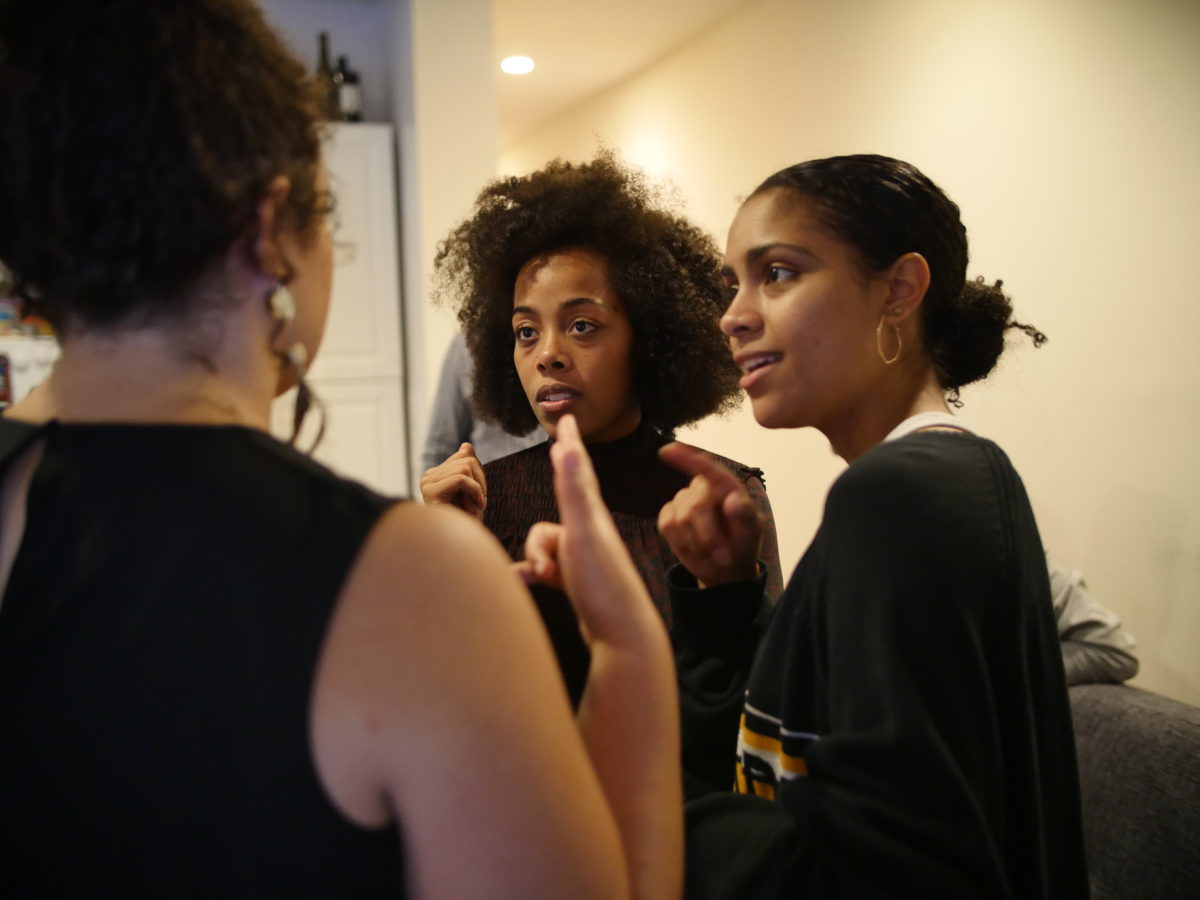 A few months ago, Drama students at Juilliard were invited to a screening of Fences—the first of the ten plays in August Wilson’s Century Cycle which Denzel Washington will produce and direct onscreen in the upcoming years. Afterwards there was a Q&A with Mr. Washington, in which he took the time to deliver words of urgency, advocating for young black artists to develop craft and become producers of their own art. HomeBase Founder and Artistic Director Brittany Bradford, in her third year at Juilliard, has been boldly answering that call herself. I’ve been grateful to be able to collaborate with her new company as an actor.

In the last six months, Brittany has assembled HomeBase, a collective of 50 black actors, directors, and playwrights. Brittany invited Maggie Odette from NYU Grad Acting as co-founder, which allowed for Juilliard and NYU actors to bond together and solidify the talent pool. HomeBase had its first show in January, and it was well received. Interestingly, Denzel’s remarks prove timely as the Oscars approach, or what has become known to some as #oscarssowhite. However, thankfully this year bolsters potential nominations for Fences, Moonlight, and Hidden Figures—all movies that told original stories and followed strong black characters wielding agency over their own lives. In many ways these films feel like a call to action, to take artistic ownership and to create.

So how did Brittany do it?

It all started over buffalo wings at a bar, as an idea on Brittany’s notepad she shared with co-founder Brandon Homer (Drama ’19). Together they brainstormed and developed the idea to create a safe space for black artists to professionally, personally, and culturally express themselves outside the structure of their training programs. Suddenly, they were calling for more napkins to whist away the buffalo sauce as the notepad filled with aspirations and goals.

Brittany writes: “At first, we wanted to give space and voice for black artists at these elite schools who may feel on a more day-to-day basis that their identity and point of view isn’t understood or heard. At first, the idea was simply to come together in meetings or in some type of club just at Juilliard so Drama students could at least give advice to each other about the common pitfalls of being a student of color at a place like Juilliard. But then, Brandon had the (wonderful) idea that we would connect and help each other even more if we were performing and rehearsing together, through a language that makes sense to us all. And then, off we went!”

Over the course of last year, HomeBase has transformed into a fully functioning black theatre company of fellowship and collaboration. It consists of ten NYC and Juilliard playwrights, thirty NYU and Juilliard actors and ten black directors. HomeBase is now an organization which has opened up a running thread of diverse storytelling; as well as communion, conversations, and opportunities for the next generation of black artists. Homer explains that HomeBase is essentially a foundation for black artists to root themselves in exploration.

HomeBase’s premiere performance had the goal of creating ten-minute pieces of theatre in the Meredith Wilson Theatre at Juilliard. With only ten hours or less to rehearse, the founders organized HomeBase actors, playwrights and directors with crazy schedules and hectic artistic lives. For those of you who did not experience the seed that HomeBase has planted, here’s my experience of the day.

January 8 — A Day in the Life of a HomeBase Performance

10 a.m. — Run-through was completed. Rehearsals were in full swing in every available room or hallway.

10:15 a.m. — HomeBase producers were here, there and everywhere! Decorations were being made. Headshots printed.

12:00 p.m. — “Why not Today” written by the talented Doron JePaul Mitchell, was learnt and harmonized. Because that’s how we do!

12:45 p.m. — People were rooted in the work. Audience members trickled in. Speeches were made.

1 p.m. — The showing of the work began—experiences unfolded. The song was sung. Hearts left on stage. Words piercing the air. The bow was taken. Hands were held. Silence. The thank you’s were made. Brittany was applauded for her tremendous creation. Applause. Tears. Laughter. Love.

It was over by 7 p.m. and the audience members joined us with a celebration of food donated by Melba and Amy Ruth’s outside the Wilson Theatre. Hugs. Joy. Goodbyes—but not lasting ones—not forever.

I’ve been incredibly lucky and honored to have been welcomed into the community of HomeBase. As a woman of color from Britain, I have been overwhelmed with the support I’ve received from the African American and black community in the States. The struggle in fact, exists on both continents. It is a struggle that famous Black British actors such as David Oyelowo, Sophie Okonedo, Marianne Jean-Baptiste, and Idris Elba have undergone. HomeBase matters because our stories, struggles and triumphs are personal, beautiful and complex. HomeBase reclaims the right to tell the truth, in the way of true black tradition – verbally – through our own voice.

Brittany is currently planning her next steps for HomeBase. Click here to stay involved with or to donate to HomeBase.