…The life of a Juilliard student is incredibly goal-oriented; it has to be in order for us to meet the standard imposed upon us by this world-class institution. But sometimes in our struggle for extreme technical proficiency and artistic excellence, we forget that we live in a diverse world full of people with totally different experiences and adversities than our own… 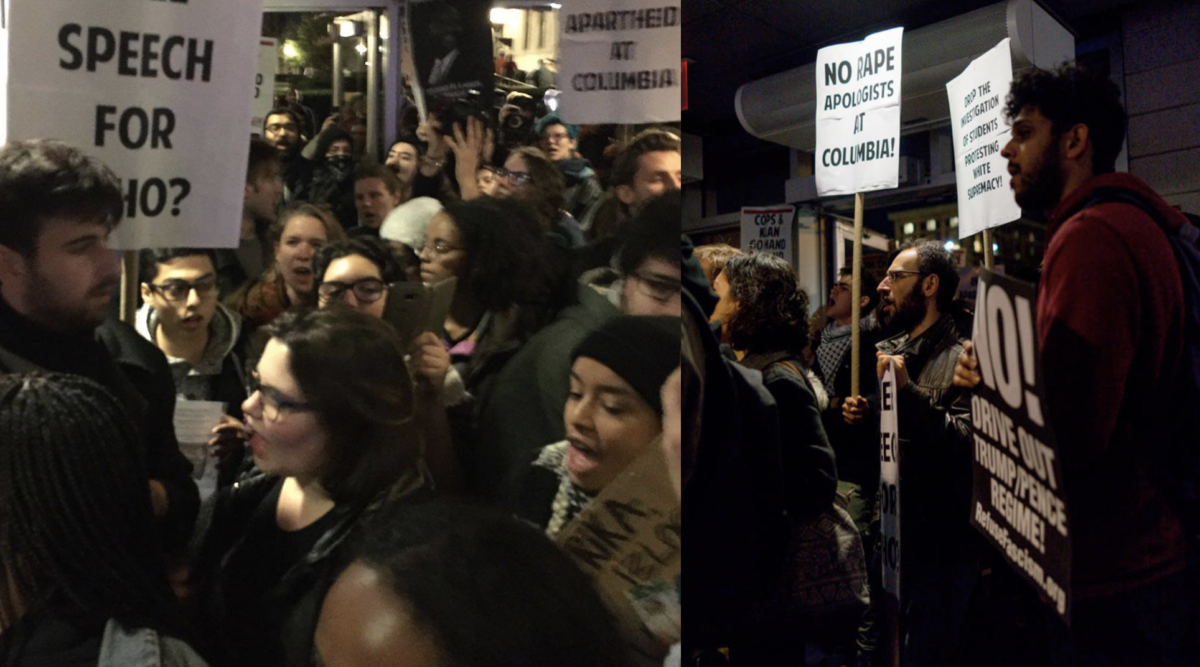 For a brief background on Cernovich and his politics, I present to you the following quotes (Trigger Warning: racism, sexism, xenophobia)

On Diversity: “diversity is a code for white genocide” —Mike Cernovich

On Immigration: “IQ tests for immigrants would solve most of our problems. If I could only do ONE act, that would be it.” —Mike Cernovich

On Sexual Assault: “ …‘date rape’ does not exist… It leads to a lot of false rape accusations.” —Mike Cernovich

On Gender Roles: “Women follow the strong men, and the weak men follow the women. It is and always will be that way.” -Mike Cernovich

About 200 community organizers, students, and Harlem residents organized to protest the event. The aim was to deny Cernovich a platform to espouse his hateful and backwards rhetoric, and to let the Columbia administration know that the community would not stand for the administration’s apparent ambivalence toward white supremacy on campus. People were invited from neighboring campuses and neighborhoods to express solidarity. Around 7:45, a few members of the Juilliard community and I caught up with the group as they were moving across campus. I heard them before I saw them, chanting, “Black Lives Matter” and “It’s Not Free Speech, It’s Fascist Thuggery.”

It was a diverse coalition of black, brown, and white faces, women and men, young college students and older members of the Harlem community.  We converged on Lerner Hall and packed into the cramped lobby backed up to the entrance, all the while chanting, “Let Us In” and “No Justice, No Peace.” A few people pounded on drums and paint jugs, giving the chants a rhythmic fervor.

It’s difficult to put into words what one feels at an event like this. You tend to start out self-conscious, especially in an unfamiliar place surrounded by strangers. But when you remember why you’re there, to gather in solidarity and let the world know that you refuse to stand for bigotry in your city, you trade your inhibitions for inspiration and find the strength to become part of something bigger than yourself. As you chant louder and louder, you feel a sort of catharsis; after all of the times you’ve had to watch in anger and frustration as public figures openly degrade members of our society, you finally have a chance to do something.

The life of a Juilliard student is incredibly goal-oriented; it has to be in order for us to meet the standard imposed upon us by this world-class institution. But sometimes in our struggle for extreme technical proficiency and artistic excellence, we forget that we live in a diverse world full of people with totally different experiences and adversities than our own. As citizens of the world, we owe it to ourselves and each other to be informed, to sincerely listen to those with different experiences, and to constantly question our own biases and preconceptions. And maybe, if we do, our conscience might compel us to take some action to make this world of ours a more compassionate and empathetic place.

For me, part of that action includes drawing a line between free speech—which can facilitate mutual understanding and growth—and fascist hate speech, which aims to dehumanize and denigrate people. The latter has no place on college campuses.

NYTimes: Who is Mike Cernovich? A Guide

ADL: From Alt Right to Alt Lite: Naming the Hate